About a two weeks ago a friend and I decided to go paddling, maybe the last paddle for this year. I haven't decided yet if I'll do a longer paddle tour to end the season. So we went paddling at the Donau. After some discussion we choose the part south of Ulm.

We started in Rottenacker at a larger weir. A small stream flowing into the Donau is used for getting in the water. Once we got to the water we noticed that the water level was quite low and a strong current running in front of us. We put our kayaks in the water and started down the stream. After about 100 meters we saw a some stones ahead of us in the water. They seems to tighten the stream a bit but nothing we were really concerned about. Because it was getting to tight to paddle next to each other I took the lead. I tried to pass the stone formation a bit of center to the left, which turned out be a huge mistake. The stones were much bigger than we thought before. I slammed into them and got stuck. While I tried to guide my friend to the center so she wouldn't get stuck, I noticed that my situation was even worse. Water from the back started to turn the boat. A second later my friend got stuck on the other side of the stones. I tried to slipp the kayak forward to slide down the stones. This didn't workout as expected. The back got slammed against the stones and the whole boat started to turn into the river. I tried once more to slip the boat forward. This cause the kayak to finally flip almost over. With no way of turning the kayak I had to exit it. I pulled my spraydeck off and slipped out of the boat. Now the kayak finally got free and the current startet to takes us both down the stream. I managed to not get separated from the kayak and pulled it on the riverside, lost my paddle while doing it but was able to secure the boat.

I then walked back on the riverside to help my friend. Approached her while her kayak also started to slip into the river but was able to help her and free the boat before it was getting critical. Then walked back to my kayak and dumped the water from it. Luckily I was wearing my paddling pants which are water sealed, but since I was not wearing my normal paddle jacket I was still dripping wet. I got rid of one of my wet shirts, took the paddle jacket, which was now also wet because it was on the deck of the boat and got back into the boat. While I was finishing up my friend brought back my paddle.

We paddled on or better to say really started the tour now. First parts of it were quite technical. Not so much water under the kayak, strong current and lots of shallow sections. We managed our way though that and lots of beautiful nature surfaced around us. Unusual for the Donau the water was crystal clear. Almost everywhere we were able to see the ground. The river is surrounded by lots of trees and some of them already fell into it. Making it a good place for lots of birds. We saw some King Fishers and buzzards.

After about an hour I started to freeze from my wet clothe. Not having any sun and some wind didn't help either. So we decided to make an early lunch break. The next opportunity was at a small weir. We took that chance, cooked lunch and dried my cloth. Luckily the sun started to shine just at the moment where we left the water.

An hour later my cloth were mostly dry and we continued. The weir had a boat pit which was an easy ride. After a turn and some technical shallow passages behind the weir the Donau gets amazing. Lots of nature right next to the water and we saw tons of red kites, buzzards and falcons grasping around for prey. Never seen that much birds of prey a single day ever. We also tried to explore some of the sidearms but there wasn't enough water to really paddle them. When we approached the bridge in Nasgenstadt we had a huge group of swans directly in front of us. Who as they noticed us started to takeoff.

As we paddled on the water level was rising and we were finally able to explore some of the sidearms. Beside lots of swans and eurasian coots we noticed two Nile gooses. They usually don't live in Europe. As we got to Öpfingen we once again encountered a large swan family. Then passed a weir into a canal. The first part of the canal was mostly boring. Except a jung swan paddling ahead of curious and frightened at same time, not sure if he should takeoff or not. He stayed ahead of us for some time and then disappeared into the sky. Since we both hadn't really prepared the trip we didn't know where this canal would take us. 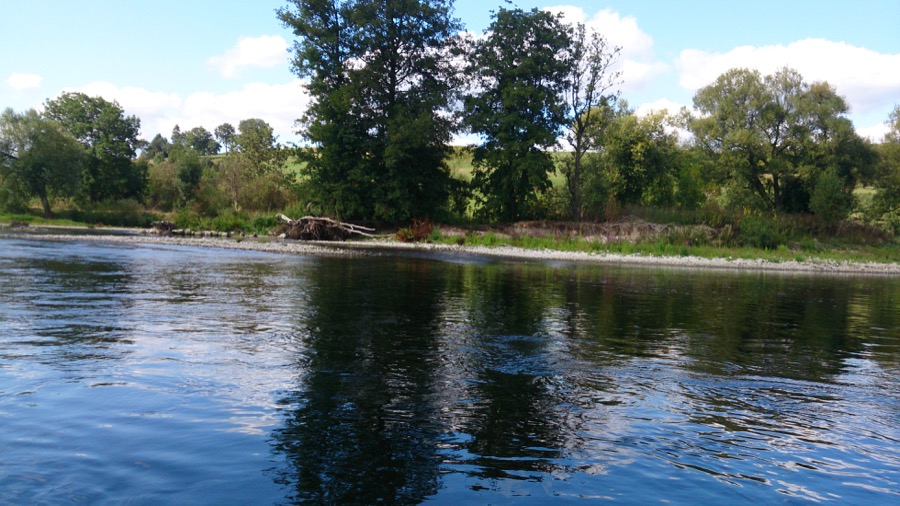 Suddenly the canal opened up into a huge sea. With an uncountable amount of birds. The surface of the water was full gooses, swans and herons. Simply stunning. We tried to paddle as prudent as possible, knowing that a wrong move would cause the birds to panic and takeoff. But then it happened. Suddenly all the gooses panicked and took off. We later noticed that it wasn't our fault. There were people with their dogs right next to the sea. After the gooses where gone still lots of swans and herons were left on the water. It was a really remarkable place to paddle. Between the normal grey herons, which are common here, we also noticed some great egrets. And of course lots of different types of ducks all around

As we approached the other side of the lake we noticed that it was cause by a water power plant which blocked the river to produce electricity. We took our kayaks out of the water and dropped them back in after the power plant. It was a lot of work to get them back into the water because of the steep walls and steps down to the water.

After passing some swans again, we reached on the final part of the trip. The water level was much, much higher now and mostly no current flowing. It looked a bit boring at first place because there were just high trees and tight bushes at the riverside and the river was a straight line. Then we saw a small sidearm, paddled into it and found some nice view while the sun was settling. After another 10 minutes of paddling we reached our final destination: the weir near Donaurieden.

We packed the kayaks back on our car which we had parked here in advanced and ended that awesome day.